Overcoming the Biggest Challenges for a New Engineering Manager

Thrive Market’s vice president of engineering weighs in on transitioning into a new role.
Written by Tyler Holmes

Behind nearly every brilliant team and product lies a common thread: a leader who happens to know what they are doing.

When Satya Nadella took over as chairman and CEO of Microsoft in 2014, it was a major transition from his original role in 1992 of helping develop operating systems. But it was also a move that made sense after gradually switching positions throughout the company for more than two decades. Nadella had developed expertise in dealing with challenges in multiple roles and understood how to direct his experience to teams that would be enduring similar problems.

Nadella recalled in his 2016 book Hit Refresh that the number one thing leaders must do is “to bolster the confidence of the people you lead.”

However, boosting the fortitude of your employees is not a skill that develops overnight. It requires patience, drive and successfully applying previous lessons to brand-new scenarios. It’s hurdles such as these that prompted Mohammad Sabah, vice president of software engineering and chief data scientist at Thrive Market, to tell us that taking on a manager position was the biggest challenge of his career.

According to Sabah, who first became an engineering manager more than 10 years ago, the most important key to excelling at the role is a constant process: developing your vision and setting context early and often for your team. He also recommended analyzing your motivation for taking on the mantle to determine best fit and fully comprehending new leadership responsibilities.

Built In LA dug into this topic with Sabah to gain additional insight and advice on facing his biggest challenges — and overcoming them — over the last decade. 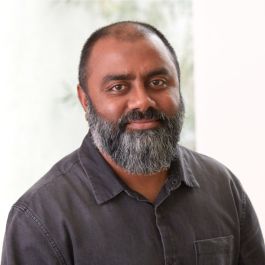 What was the single biggest challenge you faced during the transition from individual contributor to engineering manager?

Moving from being an engineer to an engineering manager is one of the most challenging transitions I have had to make in my career. I first transitioned to being an EM when I was at Facebook more than a decade ago, and have since been managing engineering teams ranging in size from 10 to 100 people at multiple tech companies.

Managing teams at each company had its own set of challenges and idiosyncrasies based on the stage of the company, demands of the business and growth trajectories. However, if I were to pinpoint the biggest challenge, it would be that as an EM, you will need to put company first and your own team next.

As an individual contributor, you would have been used to this being the other way around. You would do your job first, and then help your teammates whenever you can. As an EM, you have to be able to lead from the front, and always be two steps ahead of the game. As you analyze projects that your team is working on, it’s critical that you provide the team with the right context for them, align them with the business goals and objectives, and align the resources so they are best suited to the projects that they are assigned to.

How did you overcome this challenge, and how has it shaped your approach to management?

The best way to think of moving from being an engineer to being an EM is as a transition, rather than a career progression. The demands and requirements are just very different from what you were used to. Becoming an EM is not a promotion or a step up. You should think of it as a lateral track. I advise others to take three practical steps to embrace that challenge.

First, develop your vision and set context early and often. One of the most important roles that you will play as an EM is to align your team with business objectives and goals. This is going to be a constant process, and one that will require you to ensure that the team is moving in the right direction and prioritizing accordingly.

Second, trust to enable trust but hold the team accountable. As an EM, you have to ensure that you set clear expectations with them that, while they are responsible for technical decision-making, at the end of the day you will be holding them accountable for results.

Third, take collective action. You need to coach the team to be ready to disagree and commit when needed, and ensure that the team is putting their best foot forward.

As an engineering manager, you have to be able to lead from the front and always be two steps ahead of the game.”

What advice would you give to someone who is transitioning into their first engineering manager role?

As you transition to becoming an EM, perhaps the most important factor to consider is your motivation behind taking up the role. Being an EM is very different from being an engineer, and the role may not be best suited for everybody. The challenges that you will encounter as an EM and the metrics that you will be measured on are going to be very different from the time when you were an individual contributor. As EM, you are responsible for leading a team of engineers, managing technical development and ensuring project timelines are met and results delivered. This will involve pushing product management and design, driving development cycles and sprint rituals, and establishing clear technical strategy to deliver results.