This Venice-based startup wants to be the solution to cross-platform streaming | Built In Los Angeles Skip to main content
Loading... 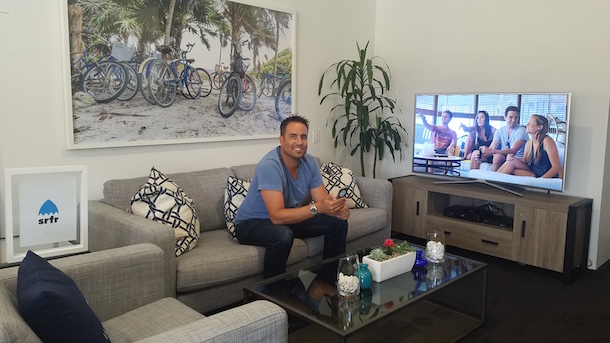 A startup founder’s “lightbulb moment” can come from something as innocuous as making fun of an outdated technology, but in the case of srfr CEO Dan Unger, his lightbulb moment came during a weekly business trip to Toronto during his tenure as head of Yahoo’s media division in Canada.

While watching video of his son’s soccer match on his phone, the LA-native began to wonder why there was no easy way to stream a video from his smartphone to a nearby television, and over the next few months, Unger, who had enjoyed a very successful corporate career, became infatuated with creating a solution to the cross-platform streaming problem.

“I was at the point in my career where I really wanted to get involved in a startup, because I felt that I had had a successful career in the corporate world, and I was really excited about the prospect of actually going and building a product, and seeing it from start to finish,” said Unger. “I was able to be successful at creating cross-functional teams that worked on both business and product, and also the sales and marketing side, so I think that the corporate world gave me a great tool set to put me in a good position from a startup perspective.”

srfr is a mobile app that allows users to stream videos from their smartphone or tablet to their smart television. It might not sound like a particularly novel concept, but when Unger started the company in 2014, the cross-platform streaming industry was very, very segmented. Between the wide variety of smart televisions available and the vastly different operating systems employed by popular smartphones and tablets, the ability for a consumer to simply stream a video from their phone to their television could only happen by way of a third party device like Apple TV or Google Chromecast.

“Flash forward two years later, and the market is still actually really fragmented,” said Unger. “You've got lots of different solutions that are out there, although I would say that the solutions aren't really ideal for the consumer experience, and there's no standard in play. We really want srfr to become the standard, and become the way for people to stream videos.”

Instead of launching as a private beta, Unger opted to use his knowledge of international markets to the app's advantage. The team chose New Zealand and Argentina, and used the opportunity to learn on the fly while also building brand awareness internationally.

"Launching in these markets allowed us to test out the flow and identify any potential issues that might come up through those experiences," said Unger. "It's been really valuable for us and it's something that I think is critical for building an app. We're essentially testing out our product on a smaller scale as we're prepping for the US launch, and we've eliminated a lot of potential issues that way."

Now two years removed from corporate life, Unger is still excited about the opportunity to focus solely on a singular entity, one that he and his team created on their own and intend to see through to the end.

“The thing that I love the most is that we have one product that we're working on, and the focus of all the team is ensuring that this product is successful and that it's operating well,” said Unger. “Coming from a large corporation that had multiple products in-market at all times, being able to focus in on one specific product that I'm passionate and knowledgable about is really exciting.”

The startup, which launched this week in North America, is in the middle of raising an additional round of funding, which it plans on using to hire locally-sourced talent, something that is very important to Unger.

"I want srfr to be an LA-grown business that can help attract talent from the great universities that we have here, and be able to continue to build within the LA community," said Unger. "We need to identify the right types of jobs that attract those students as they're graduating so they have the opportunity to stay local and have great opportunities for growth."