This Santa Monica startup is revolutionizing how companies accept returns 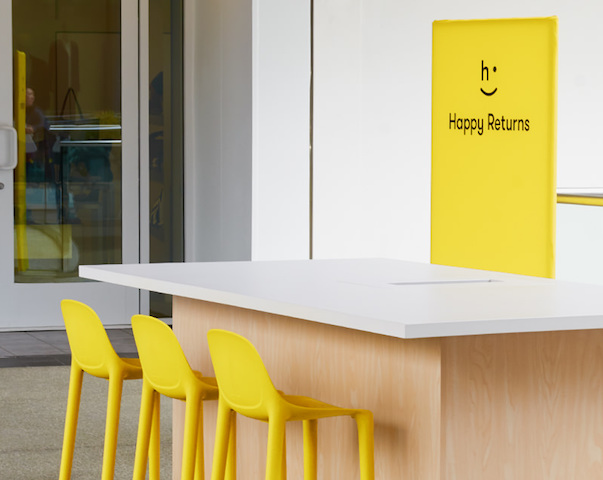 As inconvenient as they may be to consumers, retail returns are an even greater logistical challenge for many early-stage e-commerce startups. Since most of these websites don’t have brick-and-mortar locations, creating a process that is as intuitive as it is cost-effective can be a major hurdle in the company's efforts to scale.

Santa Monica-based Happy Returns has created a system to eliminate this e-commerce headache. Companies bring their product to one of the company’s “Return Bars,” cutting out the packaging, mailing and general annoyance many customers experience with attempting to return an item.

Founded by two HauteLook veterans who helped create a program where HauteLook customers could bring items they purchased to a Nordstrom’s location, Happy Returns offers startups the opportunity to cut out a number of costs associated with returns, while keeping customers happy.

“We really didn't know how many of the returns would come back to the physical stores, but it turns out that the vast majority of customers shopping online actually prefer to return items in person,” said co-founder Mark Geller. “Within six months, 75 percent of all Hautelook returns were coming back through Nordstrom's physical stores.”

Geller was having lunch with co-founder David Sobie after Sobie had left the HauteLook. The two, somewhat jokingly, agreed that the only way that Norstrom's could generate any more traffic was if they started accepting returns from all retailers.

But the idea had legs, and together, they created a new return system that's easy on the consumer, limiting individual returns to a mere 20-30 seconds. Using the customer’s email address, Happy Returns’ proprietary app is able to interact with partnering retailers' back-ends to identify the exact purchase. If the consumer wants store credit, the process is completed instantly, and they receive a confirmation email from the retailer. Happy Returns packages the product in a pre-labeled bag and adds stickers containing information the retailer needs, and they aggregate all returns at the end of the day.

"The benefits for the retailer are much greater customer satisfaction, which results in more conversions and greater loyalty, as well as lower costs," said Geller. "One of the biggest costs in a traditional return process involves communicating with customers about their return, so by giving the refund upfront, retailers are also eliminating a huge chunk of their calls."

The company closed a $1.9 million round of funding in April, led by Geller and Sobie's old boss, Greg Bettinelli of Upfront Ventures. They opened their first return bar not long after and partnered with Santa Monica-based retailer Tradesy to provide their return solution as both companies grew.

As Sobie represented Happy Returns at R/GA's Connected Commerce Accelerator in San Francisco, the company is planning on expanding to a number of cities, including San Francisco and Chicago.

“We are an extension of their brand,” said Geller. “This is a way for companies to reach out and touch real customers in the real world, which really adds a component that customers really enjoy.”