How to build a successful startup without any VC funding

by Patrick Hechinger
If there is one buzzword floating around the startup world right now, it's "lean." The market got off to a tumultuous start in 2016 and it's becoming apparent that VC's aren't willing to shell out the cash as frequently as they have in years past.
But within an ecosystem that is now accustomed to large seed and series A rounds, how do you even go about starting a company without VC backing? We spoke with three LA founders to find out how they kept both their companies and their sanities in tact through the bootstrapping years: 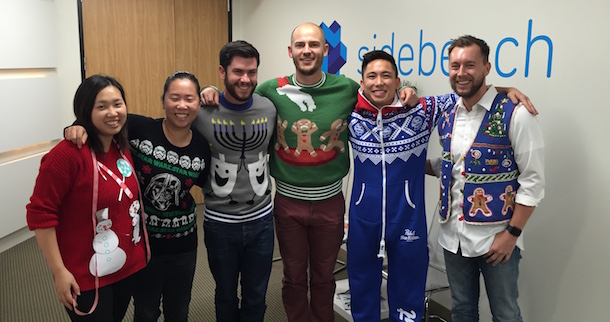 Sidebench
View Profile
We are hiring
We are located in Santa Monica conveniently located near the Water Garden.
.

Why did you avoid funding? What was that initial decision process like?

KY: Sidebench was started out of my apartment with only $75 to start the incorporation process. We had our first client pay us half upfront, and we were profitable from that point on. I knew I had access to outside capital, but I wanted to avoid any pressure of potentially compromising the company vision for the sake of short-term profits and growth targets. I have always believed that great businesses can be bootstrapped and organically grown, and those that do, benefit from more creativity and a more interesting diverse culture.
NS: We realized that even if we had more money at the time, what would we do with it? Money was not the barrier to growth — it was building our client base and building our ability to bring in larger clients. If we had been looking to do more spec work to try to find these clients, or if we had to hire a lot more people full time early on and needed the cash reserves to do so, then it would have made more sense.

What struggles came with that decision and what were the hurdles it created as the company grew?

NS: We sacrificed a lot of time, found clever ways to deliver on things and our first few contractors were part time. Initially it was Kevin and myself and a few outside contractors — some of which he knew through Accenture — and in that world if you’re not actively staffed on a project you are on the “bench.” We were doing side projects using people from that bench so that’s where Sidebench came from.
KY: Early on, limited cash flow forced us to make some very hard decisions on what we should invest in. Those were very difficult decisions and I lost sleep over many of them. I am glad we were forced to maintain laser-focus on only the top priorities in achieving our long-term goals. Some of our R&D projects had to be explored and delivered on extremely lean budgets like an Augmented Reality App (AR Demo Video) was done on $1,500 budget back in early 2013 and a VR / 360 Video which we made with a $12 VR camera rig and six GoPro cameras from employees & friends
Enterprise companies and top brands were hesitant to make the leap with a smaller company. Early on, we would get to final rounds and often see large project deals be awarded to a multi-billion dollar global technology consulting firm or a larger international agency. We are now consistently winning those projects, due to the organic growth of our team size and better communication of our fundamentally different approach to creating custom software.

When did you realize you had made the right move?

KY: It's amazing to look at the financial stability of Sidebench now and see the many opportunities that we are able to pursue: we are now able to invest in the strongest startups that go through our New Venture Discovery program. From the beginning, Sidebench has been led under a Servant Leadership model, making professional and personal development our top priority. I'm not sure we would have been able to do this without keeping ownership of the company 100% within the day-to-day operating team. 4 years later, it's incredible to see our culture reflect this so strongly, and to see senior Sidebenchers mentor and 'serve' all new joiners.
A clear indicator has been our ability to lure top talent away from top tier consulting firms and heavily-funded high growth companies to Sidebench. They are attracted to Sidebench's bootstrapped story and encouraged by how we've grown the company, continuing to make smart strategic decisions and always staying true to our core values.

Why has Liferay not taken VC funding?

Funding is often a trade-off between retaining ownership and control of a company against achieving scale or viability. You're building a defensible advantage that's so favorable that it's worth losing ownership because it makes it hard for others to copy you. And that means the value of your company goes way up, so that even though you retain a smaller portion of ownership it's of a much bigger pie. For example, you might need money for financial incentives to get people to sign up for your service. For some startups, it's an even more straightforward calculation: you just need to get a physical prototype built, and doing that requires money because hardware manufacturing is expensive.
Liferay's been fortunate enough that our goals weren't constrained by capital: software has low production costs, and with open source as our distribution model, we minimized spend on marketing and sales. We certainly needed money to build the business, but we were able to bootstrap through professional services.
We've been able to keep 100% ownership of the company, which has tremendous advantages. We're able to balance the sometimes competing priorities of our customers, employees, partners, and open source community members, for example. We're able to prioritize our values and vision over the kind of unhealthy growth that VCs sometimes demand.
I also think building your own company organically is just good discipline that keeps you grounded. Some of what's gotten companies like Zenefits in trouble recently probably has a bit to do with having access to so much cash all at once. We're all human, and operating free of constraints makes it easy to get carried away. And it's not always the crazy stuff—sometimes it's simple things like not over-hiring and then having to lay people off later. There's a lot of cutting back happening in SF right now that's got to be painful for employees.
For the startup ecosystem in Los Angeles, we should build a different kind of culture from Silicon Valley. I'm an LA native, born and raised, and it's our cultural, industrial, and socio-economic diversity that makes LA one of the most interesting places to live right now. Avoiding funding helps us all to build organic companies that care about what we contribute to our city as part of our success.

When the founders and I started Liferay in our mid-20s, we had been asking ourselves how to make the most impact in the world and we thought something non-profit would be the best way. But we talked to people who told us there's a lot of value in building real market-valuable skills and teaching them to other people as a way to help others. So we slowly realized that we wanted to build a business instead of doing non-profit work.
Now at first, we just wanted to use the money we made to support non-profits, but later we realized that the business itself could be a way to help people—providing jobs, paying local taxes, and being part of the local community. And obviously our software—which, as commercial open source can help both budget-conscious organizations and also meet the needs of large enterprises—is part of making that difference. There's still a huge role for non-profit work to play and we continue to financially support organizations doing hard work that can't be addressed through for-profit means.
All that to say, while we never decided funding was absolutely out of the question, we were very sure of our reasons for building the business, and not compromising that was important—especially since we realized that the limiting factor in helping people is often not money but opportunity and expertise. While we've kicked the tires on getting funding over the years, every time we talked to an investor, we'd start the conversation saying, "We don't want to be bought and we don't want to go public—can we have a relationship?" and the answer was always a polite "no."
At this point we're pretty certain that investment isn't going to help us achieve our goals and we've been happy with what we've achieved and think we can continue to go it alone.

What struggles came with that decision and what were the hurdles it created as the Liferay grew?

I think you can probably argue that having funding would have made us less timid about growth and capitalizing on our success, but as mentioned before I think there are pros and cons with that. Treating the company's money like your own forces you to solve problems creatively instead of throwing money at them. And we're very deliberate about who we hire, which has helped us retain a very strong culture. Liferay people are bought in to our vision and values, and that's something you just can't buy with funding.
The other thing we've often wondered about is whether having funding would have given us more visibility and connections. I'm sure it's nice to have Elon Musk or Tim Cook or Peter Thiel sitting on your board of directors, and I've always admired forward-thinking VCs like Peter Fenton at Benchmark or David Skok at Matrix. It would have been great to have smart guys like that to bounce ideas off of, but our choice has forced us to figure out things on our own.
We've also wondered whether getting mentioned in The New York Times or the Wall Street Journal is only within the purview of the funded, but I guess the lack of coverage keeps our egos in check, and the tradeoff is worth it to retain control of the company.

When did Liferay realize it had made the right move?

You go through periods of doubt and assurances. Especially when the tech industry is booming, you wonder whether you should have taken some funding. But then the corrections happen and you know you made the right choices.
I remember one slide deck from Andreesen Horowitz from last year. Its main purpose was to justify the valuations of the unicorns, but what I got out of it was that 1) more companies are staying private, and 2) more companies are delaying funding as much as possible. I showed it to Brian Chan, our über-founder and CSA, and told him, "Hey you know that thing we've been doing for the last 10 years? I guess it's a trend after all." So that was extremely validating as well.
Ultimately getting funding might be the right move for a lot of companies but I would challenge founders to think long and hard before doing so, because you can never go back. I was in Melbourne and Sydney last week to meet with our Australian customers and partners, and at the end of a long week I was having dinner with my sales executive. She's worked at Oracle and JD Edwards. She was telling me what a special company JD Edwards had been before they went public and later got acquired. She drew obvious parallels to Liferay, and shortly before we got up to call it a night she said, "Bryan, please don't ever sell Liferay." It's moments like that, which confirm for me that we've made the right choice to stay independent.
Some responses have been edited for length and clarity.