This LA startup has crafted the perfect perk for your Millennial employees | Built In Los Angeles Skip to main content
Loading... 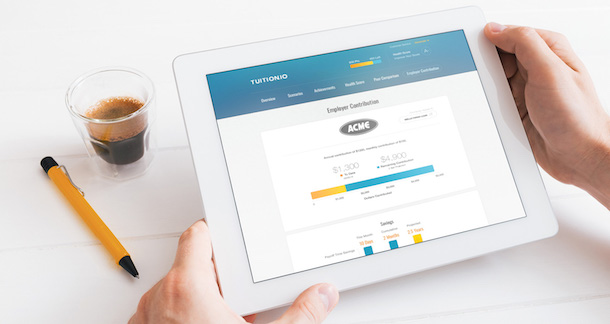 The best perks are the kind that can be universally enjoyed.
And as the number of young people suffering from student debt grows, it makes sense companies would find a way to help alleviate that stress.
After emerging from Launchpad LA in December 2013,

Tuition.io
View Profile
Follow
was originally a consumer-facing guide for student loan management. Once they reached more than $2 billion in managed debt, CEO and founder Brendon McQueen felt there was a larger opportunity knocking at their door.
“We had this great piece of tech that is consumer proven to help people increase their payments four to eight percent every month,” McQueen said. “How can we use this technology that people really like and have a bigger impact on the student loan crisis? What we came up with is an employee benefit that enables employers to contribute to employees' student loans on an ongoing basis as a hiring, retention and engagement tool.”
The company made the pivot in the spring of 2015, ending their consumer-facing side of the business while grandfathering in any remaining members at the time.
“The switch from consumer to enterprise is a tectonic shift in terms of how you think about a company," McQueen said. "It took a couple months but ultimately the enterprise side had so much traction that we could not ignore it so the choice became obvious.”

The new platform is marketed as a SaaS solution to complicated tuition reimbursement programs. The employer’s contribution is typically $50 to $200 a month in addition to the worker’s current salary. Tuition.io subsequently charges the employer for every employee they have using the system. McQueen argues the ROI for both the employer and employee is far more transparent than other perks like food or workout programs.
“If you think about millennials as a whole, over 70 percent of them have loans. So if you're looking to offer your employees a benefit that is relevant, you’re able to offer a huge group of people a solution to a pain point that is very close to their every day,” he said.
Many companies in the tech space, including LA-based

ChowNow
View Profile
We are hiring
The ChowNow HQ is in the heart of LA's tech scene. Playa Vista is near the beach, the freeways, the airport, & the tech industry action.
, have adopted the service. But the service’s appeal hasn’t been limited to tech. McQueen reports they have a wide variety of clients including retailers, financial services and small businesses.
On the employee side, companies are seeing a 20 percent adoption rate within weeks of implementing Tuition.io and the reviews have proven McQueen’s vision for the revamped startup.
“It’s obviously a really exciting time because I think we’ve really hit on something that literally makes sense for employees and employers," said McQueen. "Employees’ quantitative survey reaction to this service being launched is so good it sounds like we made them up. People are so jazzed."
Have a tip? Let us know or follow us on Twitter @BuiltInLA